HENRY CAVILL: Meeting the Man of Steel (Nerd Fest by Jim Minteer) Excerpts from a fan's wonderful recap of his meeting 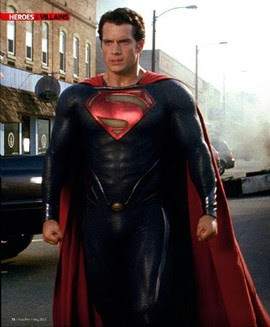 We made our way through the park toward the fire station where Henry was repeatedly filmed walking through the back door. The film crew made sure each take was properly captured. Once the crew was satisfied, Henry turned and walked toward us. I had not followed Henry Cavill’s career very closely. I only started paying attention to him because he was cast as Superman. He had been in some movies and some TV series that I hadn’t seen. But none of that mattered. At that moment, he was the most important person on the planet.

Henry, still dressed in the flannel and jeans from Deanna’s pictures, walked towards us with a powerful grace. His broad shoulders, dark hair and square jaw said he was Superman but his quick smile flashed good looks that said he was a movie star. Fox was beside me as I fired my camera like it was a machine gun, capturing his every step toward us. Deanna shrieked right next to me, “HENRY! HENRY! Can I get a picture of you?!”

Henry stopped and smiled at Deanna, “Of course you can.” I stopped taking pictures and gazed at him. I had never heard Henry talk before. I knew he was British and expected his deep voice to have the flair of an English accent but it held more than that. He’s a native of the Channel Island of Jersey and his accent held a slightly different tone than a typical English accent. It was thicker and more robust. Even with the accent, he had the vocal styling required to play Superman.

Deanna ran up to him with her own smile spread across her face. She gripped him in a big hug then held her camera out yelling, “Will someone take a picture of us? Please?! Anyone?!” Before Fox could move, I dropped my camera around my neck and grabbed hers. She gasped a “Thank you!” Her hand was shaking so bad that as soon as the camera hit my hand she let go and it dropped to the ground. Her eyes lit up in panic, “Oh no! Oh no!”

I bent down, picked it up and turned it on, “We’re good. It still works.” Henry patiently waited and softly laughed as Deanna quivered next to him. Her enthusiasm was contagious and he slid his arm around her as she snaked hers around his waist. She secreted her other hand to his stomach, getting a feel of his astonishing physique. 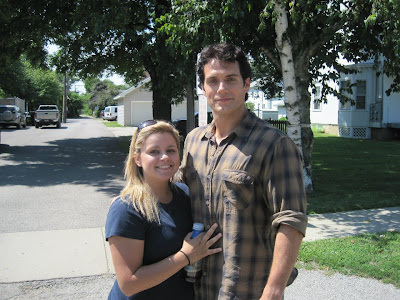 I snapped a couple pictures of them and Deanna’s face beamed with appreciation. She looked at Henry and exhaled a, “Thank you,” while I handed her camera back to her.

“Henry, can I get your autograph?” I reached into my pocket and pulled out my In-Case-Of-Famous-People marker.“I don’t have anything to sign so will you sign my shirt?” I decided long before I went on the trip that I wasn’t going to be one of the fan boys that wore a Superman shirt to hang around the set. I am a nerd but I still have some self-respect. However, I did wear a blue t-shirt that resembled the blue of Superman’s costume. I figured that was close enough to count as being fan without going over the top.

Henry took the pen from my trembling hand and kind of cocked his head in confusion, “Sign your shirt?”

He laughed, “Ok. Where would you like it?” I pointed to the left side of my chest. He leaned in, “What’s your name?” 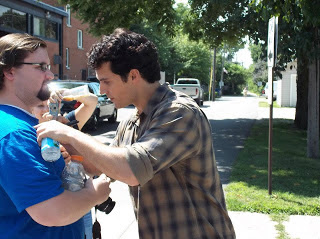 “Jim Minteer.” I looked at Fox and he snorted a laugh.

Henry reached out and started writing on my shirt. I looked down and saw Henry’s forearm as it held my shirt in place while he inscribed his name. It was thickly corded with muscle, with deep grooves running around his forearm towards his elbow. Henry’s brow furrowed in concentration while the clicks and whirrs of cameras peppered the air. The pen steamrolled its way across my chest as sun beat down on the back of my neck. He finished the autograph and handed the marker back to me. I shook his hand, “Thank you so much! Thanks for being Superman.” He nodded a “You’re welcome,” then one of his handlers marched up and told him he had to go. He strode away with all of us taking pictures of his back.

Deanna got one last word with him, “We can’t wait to see the movie!”

Henry looked back at her over his shoulder and said, “Me too.” 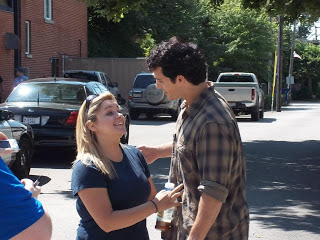 He disappeared into the small village of campers and trailers that had been set up by the Methodist church. I studied the scrawled black words on my blue cotton chest. “To Jim. Best, Henry Cavill.” I read it once, twice more then looked back up at the blank street where he just stood and I elbowed Fox in stunned glee. I had just met Henry Cavill. I had just met Superman.