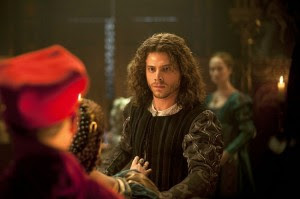 The attempt on Pope Alexander's life could have sent the Borgia Pope into hiding, fearful of exposing himself to the same threats that nearly cost him the throne. However, Alexander is nothing if not ambitious, so the near-death experience made him hungrier to gain a stronghold in the area and arm himself with enough resources to vanquish whatever plan Catherina Sforza has been cooking up. In doing so, though, he's going to have to use both Cesare and Lucrezia as pawns; will they be willing to go along with what their father wants and marry royalty from enemy lands?

On the next episode of The Borgias, Alexander has tasked Cesare with finding a bride in France after Lucrezia marries Alfonso. Naples and France are mortal enemies, but France has such a fearsome reputation and abundant resources that Rome needs to have the state in its palm. Their supplies have been dwindling at the exact wrong time, since Catherina Sforza has been pulling the strings of the Romagna families and gathering a force of her own, so the alliance with France will ensure that they have enough firepower and food to last them a battle of any length. Naples was once thought to be a key get for the Holy Father, but with the difficulty that King Ferdinand has been giving them and Cesare's accounts of their empty coffers, they might not be the important ally that they once looked to be.