ROSAMUND PIKE: FILMS IN 2013 INCLUDE THE WORLD'S END AND A LONG WAY DOWN (FAN SHARE) BY: ELIZABETH DARRELL 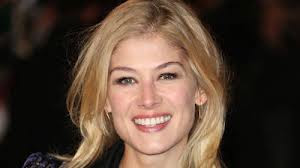 Rosamund Pike has had a busy couple of years, but she's yet to hit the jackpot with a big budget movie that manages to introduce her to audiences around the world. Although she was seen in 'Wrath of the Titans' and 'Jack Reacher' in the last two years, both geared to be international blockbusters, the films ended up underperforming and barely staying on anyone's radar.

However, Pike's seemed to veer away from those types of films of late, and her next few films show a lot of promise. Pike will first be seen in 'The World's End' in august, starring Simon Pegg, Nick Frost, and Martin Freeman. The film deals with five friends who unite for an epic pub crawl, and end up becoming humanity's only hope for survival. Although people have been comparing this with the other apocalypse comedy 'This Is The End', it looks like both films have vastly different tones.