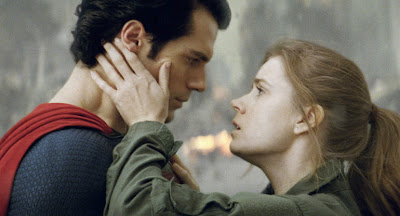 In the pantheon of superheroes, Superman is the most recognized and revered character of all time. Clark Kent/Kal-El (Henry Cavill) is a young twentysomething journalist who feels alienated by powers beyond anyone’s imagination. Transported to Earth years ago from Krypton, an advanced alien planet, Clark struggles with the ultimate question – Why am I here? Shaped by the values of his adoptive parents Martha (Diane Lane) and Jonathan Kent (Kevin Costner), Clark soon discovers that having super abilities means making very difficult decisions. But when the world needs stability the most, it comes under attack. Will his abilities be used to maintain peace or ultimately used to divide and conquer? Clark must become the hero known as “Superman,” not only to shine as the world’s last beacon of hope but to protect the ones he loves.

Set to hit 2D, 3D and IMAX cinemas on June 14th, ‘Man of Steel’ is from director Zack Snyder and producers Charles Roven, Christopher Nolan, Emma Thomas and Deborah Snyder. The screenplay was written by David S. Goyer (The Dark Knight trilogy), based upon the iconic Superman characters created by Jerry Siegel and Joe Shuster and published by DC Comics. The official synopsis and production notes for ‘Man of Steel’ can be read below.

READ MORE: http://www.flicksandbits.com/2013/06/04/new-man-of-steel-pics-showcasing-henry-cavills-bearded-clark-kent-clean-cut-superman/49099/
Posted by Karen V. Wasylowski at 11:17 AM