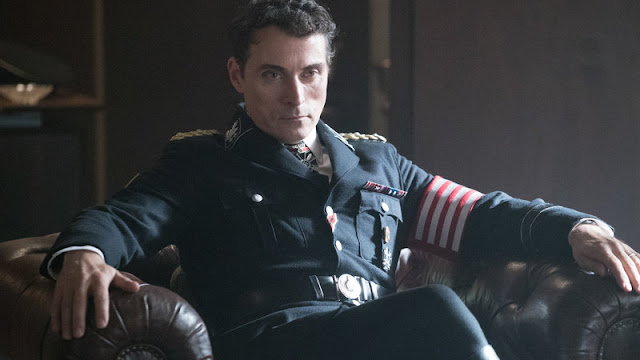 People are seeing a lot of Rufus Sewell these days.

And he's also receiving raves for his role as John Smith, the Nazi leader of America, in the alternate universe of Amazon's The Man in the High Castle, which has been renewed for a third season.

The series is increasingly loosely based on Phillip K. Dick's 1962 novel in which the Nazis win World War II, America is occupied, and many Americans seem happy with that. Sewell tells NPR's Scott Simon that recently, a fan of the show tried to give him a Nazi salute through a coffee-shop window. "And he was not, you know, the usual suspect, kind of alt-right looking fellow. He was a kind of beardy Hollywood hipster," Sewell says, "and it didn't occur to him that I might be a slightly inappropriate thing to do ... people do it to me sometimes, but luckily they don't appear to be believers."

On bringing life to John Smith

The Nazi ideology is loathsome, but people essentially are not ... Admittedly in Season 1 he seemed like a relatively one-dimensional character, and I wasn't interested until I saw episode 2, which was already written, where it became a bit more confusing — you saw him with his family — and I would describe him as a person with an alternate history inside him, you know, a person who has turned out one way, who had history gone a different way would seemingly be a different person entirely.

The way you do it, or the way I've tried to do it, is try to get as familiar as I can with what happens to people, and how they create a narrative for themselves in which they're the good guys ... and I think that's what Philip K. Dick was writing about — he was writing about what people do in order to get on.