WATCH: Olivia Colman Unofficially Votes for David Tennant as the Next Prince Philip in ‘The Crown’

BY BRIGID BROWN | 4 DAYS AGO 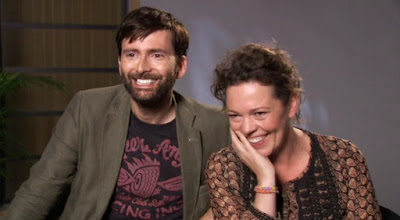 Olivia Colman is set to step in as Queen Elizabeth II in the third season of The Crown, taking over for Claire Foy who is “reigning” over the series at the moment. This was all planned from the start, for a second actress to take on the later years of the Queen… a regeneration of sorts.

Speaking of which, Doctor Who‘s Matt Smith currently portrays the Queen’s husband, Prince Philip. While it hasn’t been announced, his role will be swapped out, too. There’s a poll going on in the U.K., hosted by RadioTimes, and David Tennant is in the lead.

ou know, Tennant is also DW alum and he starred opposite Colman in BBC America’s Broadchurch.

She was chatting with the RadioTimes about starring in the forthcoming film Murder on the Orient Express (November 10) and the poll came up, with Colman responding in glee, “Oh can you imagine, how much fun!”

The Broadchurch star also threw in, “We’d never get anything done, we’d just chat all day. That would be heaven!”