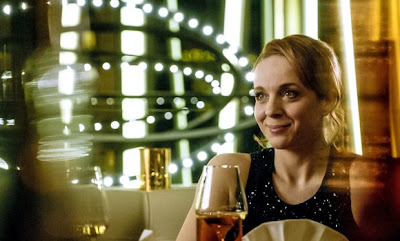 Thankfully, and just in time, Abbington and Freeman’s young son Joe has finally got his head around his parents’ job. He now understands that, just as Dad isn’t really a young hobbit who hangs out with a bunch of dwarves, so Abbington’s current co-star isn’t actually evil Harry Potter wizard Lucius Malfoy.

“He was terrified the first time I did Case Histories,” Abbington smiles. “When he found out who I was working with, he thought his mummy was going to die – Lucius Malfoy was about to take her away. We had to explain that wasn’t the case. And Joe’s 22 so it was about time he knew.” Boom-tish! Another funny line from this sparky 39-year-old who lives in Hertfordshire. Joe is actually seven, and little sister Grace is five next month.

Next you’ll see her in ITV’s Mr Selfridge as the lovelorn head of accessories, Miss Mardle, and come winter she will be reunited with Freeman on screen – for the first time since they met in 2000 on the set of TV movie Men Only in BBC1’s Sherlock. She is sworn to secrecy on any plot or character details of the new trio of films. But paparazzi snaps from the Bristol set have revealed Abbington wearing a wedding dress. Are the rumours true? To wit, is she playing “love interest” Mary Morstan, and is she about to marry Freeman’s John Watson?

“Well, was I marrying [lovelorn pathologist] Molly maybe?” she says with a coquettish twinkle. “I put that [idea] on Twitter and they all went mad, all the little Sherlock nuts. Not mad,” she backtracks. “They’re very sweet girls. But there is a fandom...” 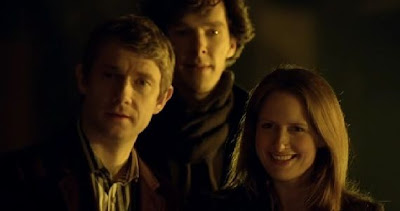