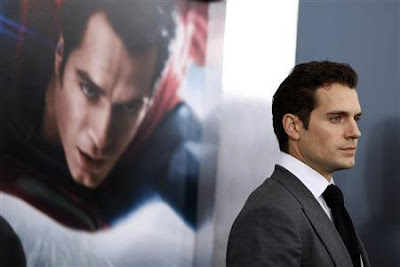 Well, the Ministry isn't the only one with a Krypton-sized crush on "Man of Steel" star Henry Cavill. Apparently, Cavill's costar Amy Adams is dealing with a little fan of her own.

Sitting down for an interview on "Chelsea Lately" last week, Adams, who plays reporter/love interest to Cavill's Superman, said her 3-year-old daughter Aviana had quite a hankering for the leading man too.

"It started when she met him, she liked the look of the 'suit,' so when he turned around ... she goosed him," Adams told Chelsea Handler, demonstrating her daughter's impish behavior.

The actress previously boasted that Cavill, 30, was a comely fit for the role in Zach Snyder's upcoming film, which comes concurrently with the 75th anniversary of the comic book hero.

"It takes a second to adjust, because Henry's just so good-looking," Adams recently told Details of her big-screen costar. "He's dashing with just a hint of danger, and it's kinda great. It's super-hidden. But you know there's a steeliness within him that makes the gentlemanly qualities all the more interesting."

Adams, 38, said that she auditioned twice to be Lois Lane (one film never got made), a pursuit that appeared to stem from her own lifelong thing for the last son of Krypton.

Posted by Karen V. Wasylowski at 9:45 AM