Sherlock creator Steven Moffat's son Louis is planning to become a full time actor after landing a role in the hit series.

Asked if he had to audition for the role, Moffat said: “Yes and we did warn him that he probably wouldn't get it.” 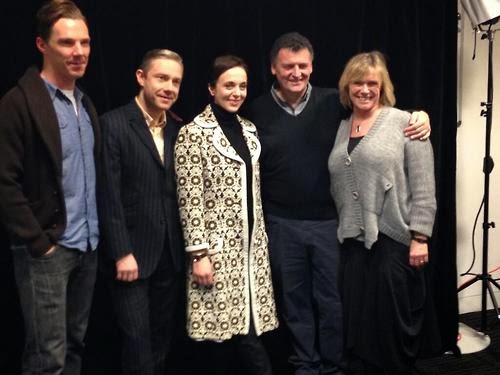 Benedict then added: “I thought he was amazing, really really moving. It was great to share his first professional gig with him.

“He is auditioning for another role now, good luck Louis.”

Moffat and his wife Sue Vertue then told how they had insisted that he may struggle to land the part, as they had no say in if he got the job.

They also told him he had the wrong eye colour, but Louis responded by saying: “I can wear contact lenses.”

He went on to land the role and put in a great performance.

“Thankfully he did get the part, otherwise he would have packed his bags and moved out,” joked Moffat.

Posted by Karen V. Wasylowski at 9:32 AM