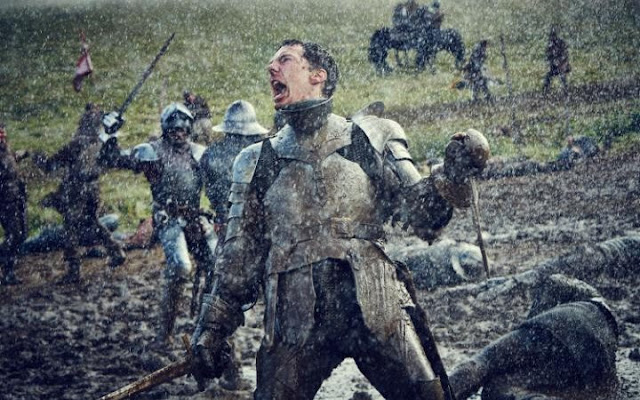 And so, the most famous actor of his generation finally got to wear “the hollow crown”. In all the fuss over the BBC’s 2016 series of Histories – Aunty does six hours of epic, difficult Shakespeare – one man’s shadow has loomed over it. Just as the logic of the plays’ increasingly savage narrative arc is to give birth to a figure of expansive evil in the twisted shape of Richard III, so that sense of culmination was echoed in the casting.

We were all waiting for Benedict Cumberbatch’s rule. He didn’t disappoint. The shaggy-locked malingerer he’d offered for part two – when there were still several family members between Richard and the throne – was mainly given to literally stabbing people in the back, and looking somewhat wild-eyed and hammy in the process. But Cumberbatch got a haircut for Richard III. He smartened up, sharpened up, and sliced into your head. Speaking his monologues to camera like Frank Underwood from House of Cards (Kevin Spacey indeed modelled his Underwood on Richard), this tyrant made you think like him even as you hated him.

One sequence stood out. Tap tap tap went the ring on Richard’s finger on his chessboard, its paranoid beat taking us to the Tower and to the killing he’d ordered of his nephews, the most dreadful of all the dreadful deaths across the plays. The muffled groans of child-murder were spliced with shots of the actor’s putty-like face, which reformed itself from pointed intent to flabby stupefaction at his own degeneracy - Cumberbatch had never done bad better. Tap tap tap. This was a Richard who knew he could never win, who recognised the horror of his sins even as he was remorseless. When he died in the mud at the end he was the most self-loathing of creatures, as well as loathed. But anyone who watched Richard III alone, simply to revel in King Sherlock, was doing The Hollow Crown an injustice. The series had to be seen as a whole, the greatest achievement being that of director Dominic Cooke, an experienced theatre director but a first timer behind the camera. Cooke was working in a theatrical tradition - this tetralogy on the Wars of the Roses has been presented as three plays (the three Henry VIs combined into two) before, most famously by the RSC in 1963 and most recently by Trevor Nunn at the Rose Kingston in 2015. But Cooke understood the urgency to make the stories cinematic, to cut out the fug of reverence that might induce him to prettify scenes with their pretty language. Indeed he has gone out of his way to make his version of these four plays uglier than the originals.

Most of the deaths in Richard III happen off stage. Here we saw or at least heard the lot. The most bloodthirsty latter stages of Henry VI received truly horrific renderings in the middle film, in particular the three-way slaughter and crowning with thorns of Richard Plantagenet, Duke of York (Adrian Dunbar). And what use this graphic horror, this seeking out of violence? One answer, already much discussed, is a determination to make it appeal to the same audience that goes potty for Game of Thrones, the most popular TV series in the world.