Henry Cavill has been spotted in and around the Detroit area and he’s already made himself quite at home…
Even if that means causing a scene with the locals.

An eyewitness tells Celebuzz the Man of Steel star was at a popular watering hole where there was a misunderstanding and all over… you’ll never guess… a napkin.

Wow! We were intrigued. So, was he learning sign language? Making news friends? 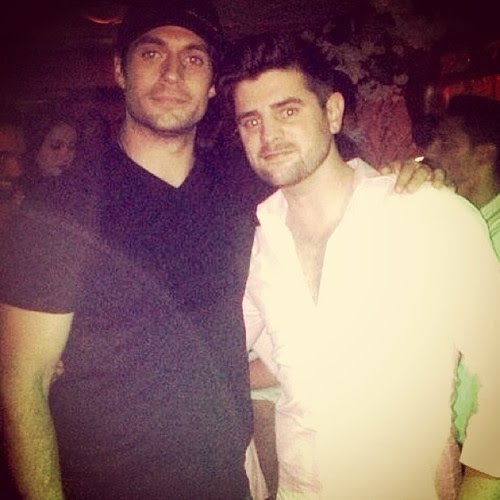 Cavill, who’s in town prepping for Batman vs. Superman, was at Imperial Bar in Ferndale with his trainer when there was a little “ruckus,” Mangiardi told CB!

“He was minding his business with his trainer. My friend asked for a napkin near Henry, that’s what caused a whole misunderstanding.

“And he got the napkin for my friend and said something, but he's deaf so he got upset.

“Henry was saying ‘say your words’ to my deaf friend, but he never heard it so that made Henry upset," Mangiardi added.

“Henry thought he had a mouth full of food.”

Then, the regulars got involved.

We know what you're saying -- Great Krypton!

“Other people overheard Henry’s comment and people started to spread the rumor in the bar. When we heard about it, we got upset," said Mangiardi.

“But I’m sure he looked annoyed to other people.”

And just like a game of telephone and when word around the bar spread that you don’t mess with the Deaf Wolfpack it must have gotten back to the actor, who like Superman who stands for truth, justice and the American way, the action star righted his wrong.

“At the end of the night while the bar was closing, Henry came up to us, the Deaf Wolfpack, and shook hands with us, including the one who asked for napkin,” Mangiardi said. “He apologized and made some basic gestures. I’m sure he learned his lesson by jumping [to] his conclusion with us. I hope the next time he bumped into us, he will respect the deaf culture and appreciate us.